September 4, 2012 · by bakingbeardy · in Beardy Boyfriend Weekly Bakes · 21 Comments
Welcome to the first ever Jewish Holiday Blog Party, hosted by Jessie of Taste and Miriam of Overtime Cook, and sponsored by Kitchen Aid! As you may know, Rosh Hashanah, the Jewish New Year is coming up, and Jewish bloggers from all over the world are celebrating with all kinds of twists on traditional Rosh Hashanah foods.
To kick off the celebration, Levana Kirschenbaum is giving away a copy of her fabulous new book, The Whole Foods Kosher Kitchen to three lucky winners. To enter, leave a comment on this post. Limit one entry per reader per blog so click over to the other participating blogs below for your chance at additional entries! Giveaway ends 5 am eastern time on September 11th, 2012.
Prize is sponsored by Levana and available to readers from all blogs participating in the Rosh Hashanah Blog Party. Prize can only be shipped within the US.
This is the first of hopefully many exciting Holiday Blog Parties, so if you would like to join in the fun, please email holidayblogparties@gmail.com.
Stop by and check out some of these amazing Rosh Hashanah themed recipes on the following blogs:

Marlene of The Jewish Hostess made Apple Challah
Amanda of The Challah Blog made Pomegranate Challah
Shelly of The Kosher Home made Apple, Honey and Pomegranate Challah!
Sides, Salads and Starters:
Sarah of Food, Words, Photos made Tzimmes (Rosh Hashanah Carrots)
Tali of More Quiche, Please made Roasted Beets and Butternut Squash
Roberta and Lois of Kosher Eye made Simanim Salad
Chanie of Busy In Brooklyn made Pomegranate Coleslaw
Rivki of Life in the Married Lane made Super Salad
Hannah of Cooking Manager made Beets Marinated with Ginger and Garlic
Sina of The Kosher Spoon made Pomegranate, Almond and Raisin Couscous
Shulie of Food Wanderings made Rosh Hashanah Salad
Hindy of Confident Cook-Hesitant Baker made Warm Roasted Beets with Farro
Sarah of Kosher Street made Sweet Potato Apple Tzimmes
Main Dishes:
Jessie of Taste made Smoked Salmon
Samantha of The Little Ferraro Kitchen made Chicken with Dates
Michele of Kosher Treif Cooking made Coconut Chicken Strips with two dipping sauces
Melinda of Kitchen Tested made Key Lime Glazed Duck
Stephanie and Jessica of The Kosher Foodies made Chicken Braised in Pomegranate
Liz of The Lemon Bowl made Beef Brisket
Estee of Anyone Interested? made Easy Breazy 5 Minute Brisket
Desserts and Drinks:
Miriam of Overtime Cook made Mini Apples and Honey Tarts
Laura of Pragmatic Attic made Fresh Ginger Honey Cake
Susan of The Girl in the Little Red Kitchen made Honey Caramel Apple Galette
Danielle of Hugs and Cookies xoxo made The World’s Best Rugelach
Amy of What Jew Wanna Eat made an Apple and Honey Cocktail
Nick of The Baking Process made Apple and Date Honey Squares
Lisa of The Monday Morning Cooking Club made Honey Chiffon Cake and Traditional Honey Cake
Leah of Cook Kosher made Pomegranate Ice Cream
Nossi of The Kosher Gastronome made Non-dairy Key Lime Cheesecake Bar with Key Lime Caramel

I admit, I’m not Jewish.  But I grew up in a part of Delaware with a sizeable Jewish population, to the point that I attended one of the few schools were they took the idea of a Judeo-Christian ethos seriously enough to actually give us the day off for Jewish holidays as well as Christian ones (as they should.)  As a kid, I was obsessed with matzah, to the point that I used to trade for it with the kids in my school (now I feel kind of bad, as they were eating my pb&j on bread!).  Of course, as they informed me, I might not have loved it so much if I was required to eat it.  But I wasn’t and so to this day, I still buy some in Whole Foods for a delicious snack!
Rosh Hashanah is the Jewish New Year and something I’ve always loved about it is that you don’t just prepare for the New Year.  You reflect on the year you’ve just lived and critically, let go of the year before you as well as asking and offering forgiveness for what’s happened that year.  Part of the traditional festive meal involves making a blessing on the apple and dipping it into the honey (asking God for a good year and a sweet year.)

I liked the idea of making an apple and honey cake which could be enjoyed with a very British cup of tea!  So as opposed to the traditional apple covered in honey, I decided to make these apple and honey raisin squares (only substituting dates for raisins, as this is another traditional Rosh Hashanah food.)

2 tbsp clear honey (I used clear, but I think there’s a couple nice flavours that would be lovely in this)

2 apples, cut up into small bits 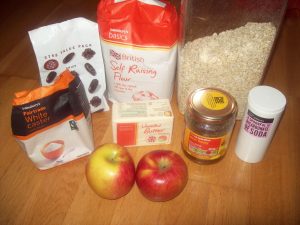 Note that these squares have no eggs, so it would work if you have someone with an egg allergy at your dinner.

Start by combining the unsalted butter, caster sugar and honey.  Heat in a saucepan until you have combined all of these and the sugar has dissolved into the mixture.

While that is mixing, combine oats, self raising flour and bicarbonate of soda in a mixing bowl.  Mix in the honey/butter/sugar mixture into the oats/flour combination until you basically have a buttery oat mixture! 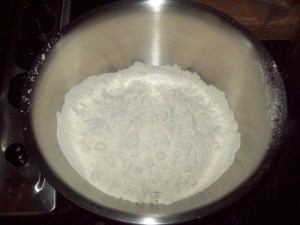 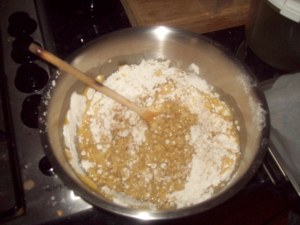 Once it’s combined, you start layering the squares.  The new mixture is used to make the top and bottom layers, with the dates and apples in between.  Put half of this mixture on the bottom of the tin (lined with parchment paper) and cover with the combined apples and dates.  Finally, cover with the second half of the mixture. 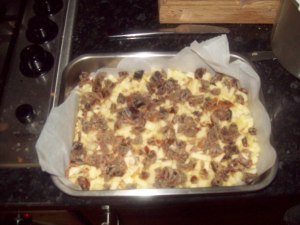 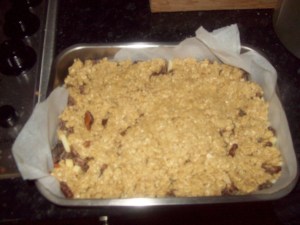 Heat to 180C and bake for about half an hour (it should be a crispy brown on the top when finished.) 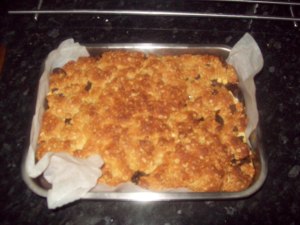 Cut into squares and enjoy (preferably while reflecting on the last year and your hopes for the next one!)  Happy New Year, everyone!  If this has inspired you into the Rosh Hashanah baking spirit, how about entering to win this copy of The Whole Foods Kosher Kitchen?  Just leave a comment below telling me whether or not you’ve ever been to a Rosh Hashanah supper and if so, what was your favourite meal? 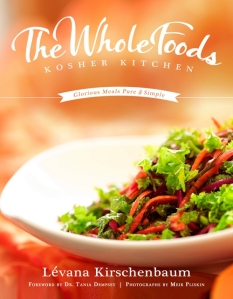 Be sure to check out the other blogs for other chances to win!